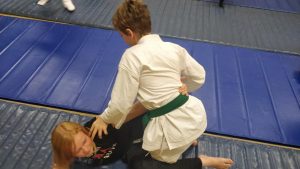 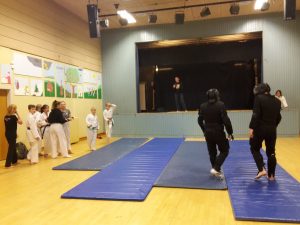 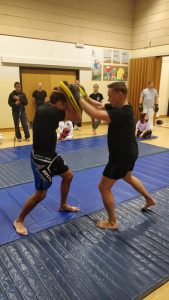 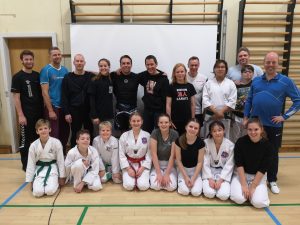 The second day of my children’s self-protection seminar in Denmark mainly focused on anti-grappling and anti-abduction, but we also covered transitioning through postures and regaining the initiative.

The seminar began with a revision of yesterday’s warm-up where we began with commentary walking, promoting awareness of environment and we gradually increased our heart rates to draw attention of changing cognitive abilities. We then drilled in escaping to safe places, covering when changing direction and various combative movements.

We then looked at postures and transitioning. There are four in-fight postures – standing, half-kneeling, seated and on the back. Standing is the fighter’s pose, on balance with the chin in, shoulders up, hands up in a ready position to strike, push, grip and fend-off and legs ready to change levels. Half-kneeling is combat base with the hands and head in the same position as before. Seated adopts the butterfly guard. On the back can be used both as a guard and also a bridging position. All the postures were taught individually and linked together without placing a hand on the ground if possible.

Then we looked at using the same strike from each of these postures as well as against the wall. This was done to teach better power development and everyone got the opportunity to confirm improved impact after all these restrictive exercises were performed. Next they trained these in transition which teaches effective counter-offensive techniques from any range. A large amount of damage is often caused in an assault when an individual ends up in a compromised position. They either get injured as they stop defending themselves and try to get up or they become fixed that position. Transitioning training over-rides these problems keeping the student attacking the attack and remaining combat effective no matter their position.

We then moved onto regaining the initiative. The cover stems from an instinctive method to cover one’s head when becoming overwhelmed by strikes. We refined this into a technique that should be malleable in its defence, keeps the defender moving into the attack and is restricted to a temporary counter-offensive recovery position before the defender puts his or her strikes on the attacker. This was simulated with a “code white” exercise where the defender closes their eyes before being physically prompted to open them and cover against the incoming strikes. Here it is important that the coaches keep striking until the defender has successfully defaulted back to striking the target. Both the cover and the posture transitioning were then combined into a multiple attack situation. Here defenders used their tactical escape footwork to try to strike just one target at a time, however, they were hindered when being made to go into compromising postures and quickly transitioning back to their feet.

The seminar moved onto anti-grappling. This area has undergone a lot of changes in the way it has been coached on my self-protection courses. I have come to accept that in order for students to have a safer environment for learning and a more realistic way for coaches to prompt good anti-grappling techniques a basic understanding of grappling needs to be taught. Grappling teaches solid structure, familiarisation with grips and, above all, the importance of positioning. Therefore, before we began going through anti-grappling techniques we trained grappling – actively cross-training in combat sports.

Grappling exercises consisted of collar and elbow ties, under-hook/over-hook pummelling and wrist grabs. We trained both countering and moving into strong positions from these generic holds as well as retaining balance when these holds were put on. Next we went back to the focus mitts and trained the hunting drill. This exercise forces the student to hunt the target whilst being pushed back. It differs from removing obstructions, which was covered yesterday, in that the defender learns to strike over obstacles and also maintains the constant forward pressure strategy.

The grappling training and the hunting striking drill were then combined. The coach breaks the defender’s posture and grips them in different ways whilst the defender keeps striking from compromised positions. We then added low-line takedowns – taught as a classic double-leg takedown – in order for coaches to prompt sprawling from the defender. This was coupled with knee strikes. This exercise can then be integrated into the previous anti-grappling exercise. With enough practice a student will learn good positioning and posture against grappling with added essential grappling movements such as defending the back and sprawling whilst maintaining a strike-based approach.

We then looked more severe grappling situations. This began with being pinned to a wall by a grappler. Here we trained with close-range attack tools such as the eye-gouge, head-butt and the elbow strike. Again, this was all taught from a strong grappler’s base. Going to the ground we looked at escaping out of the guard to standing by kicking the hip for leverage and two ways to escape a full mount position – reversing the mount and striking up to standing, snaking/shrimping out to guard, sweeping to a knee-pin before standing.

The next section dealt with the very apparent asymmetrical problems of abduction. We began with a definition of abduction and looked at video footage of real-life attempted abductions. Each of the four cases was discussed and we looked at how the abductions happened and how the would-be abductees escaped. This brought us onto the phenomenon of the Bystander Effect. A video showed a social studies experiment whereby two actors enacted a child abduction scene. No matter how much and loud the child cried out “You are not my Dad!” onlookers chose to do nothing. In the end, two strangers intervened and demonstrated astute proactive awareness and tactical manoeuvring. We discussed the 10/80/10 rule and why the more people present the less likely anyone will act. We also discussed the importance of pre-event soft skills such – as identifying possible allies – and in-event soft skills such as making eye contact with potential allies. Students also learnt to give specific instructions to bystanders rather than generally shouting out to no one in particular.

We then moved onto the “child’s fence”. This is a very important area for self-protection teachers to acknowledge if they are intending to teach children. The child fence takes into account the severe distancing problems with children and much larger antagonists, such as adult. Here the children are taught to appreciate that their personal space might extend behind their arm’s length. Drilling back down the principles of the fence, children are taught to attack what comes towards them at roughly their head height. Judgement is called by taking notice of the antagonist’s behaviours. Pre-emptive strikes are usually directly towards an antagonist’s hands then arms. A hooking slap to the back of an antagonist’s hand in order to allow the children to flee in the opposite direction is the first advised attack action. Next the child targets the inside of the arm with forearm strikes. The action used to administer these forehand forearm strikes and backhand forearm strikes is the same as the way the children were then later shown how to use incidental weaponry. Finally, if fully engaged by the adult fast bites directed towards the adult’s hands and stamps to the feet are advised as well as swinging hammer-fists to the groin or any available target.

All of this was then put back into the standard Predator vs Prey pressure test. Using tactical training suits, adults playing the role of abductors used various tactics to grab targets and worked together. Likewise, students showed better awareness of helping each other recruiting help. The fence was pressure-tested, anti-grappling techniques and the cover was put under pressure too. The entire exercise served as a good overall assessment of skills being deployed in a live situation.

The final practical activity consisted of an obsticale course drawing upon the tactical escape and agility exercises we used during the warm-ups with pursuing adults. Various items were left about for the children to use as incidental weapons which they applied in the same fashion as they had with the forearm strikes.

The lesson finished with discussions on post-event skills. The previous day’s post-fight information was revised – double-tap, first aid, reporting and dealing with the psychological aftermath – and we added in long-term self-protection aims that empower self-defenders to create safer societies. This last point included being proactive in being an example to those susceptible to the Bystander Effect.