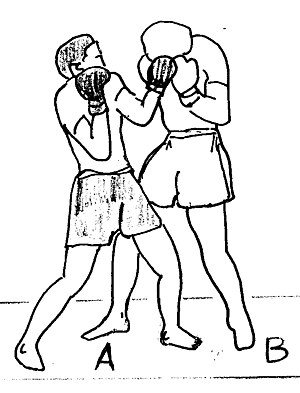 Tonight we finished our western boxing power punching off with the uppercut. This began with it being performed from the fence. I would not advise this as a primary tactic, but certain situations might dictate its use. I taught it the way Matty Evans taught me, as a vertical punch using the index knuckle. This is a rare occasion where I advocate punching to the head in a self-defence situation.

Next we moved onto the sporting context. There are many ways to throw the uppercut, but I feel it is important that the uppercut is first taught as close from the guard as possible, almost like a short jab. We then brought it into a jab/cross combination.

The third half of the lesson focused sparring. We did a couple of rounds of MMA, followed by two rounds of kickboxing and two of boxing.

We used productive sparring methods today. After a brief warm-up we got straight into progressive sparring intensity. As my “Vagabond Warrior” approach demonstrates, you can spar from cold. It is the biggest secret of most active professionals and one I learnt when I started training with them rather than under their instruction. The key to this is to be sensible. No matter what range you choose, you can begin very lightly with a trusted sparring partner and then gradually increase the intensity.

We began with two rounds of boxing and then two rounds of kickboxing. We collectively noticed faults with students’ footwork. This included having a far too wider a stance, which leaves the fighter vulnerable to low kicks, sweeps, ankle picks and single leg takedowns. We did some mirror footwork to increase speed. These are drills that involve one student following the other’s movements. It is important for the following student not to look down at the leading student’s feet when doing these exercises.  I also took advantage of the two students’ size difference. Lightweights are very useful sparring partners for middle and heavyweights if training is done intelligently, as they help increase speed. From a lightweight’s perspective, training with someone heavier forces them to increase their agility where they might have taken a more aggressive stance.

Agility can be increased by use of manoeuvring around football/soccer ladders and cones. To overload to better activate the right muscle fibres students should consider various vertical jumping exercises and methods for elevating the heels off the floor. There are some rather painful methods for this, including taping marbles or plastic bottle tops to the heels whilst performing footwork drills. Tying ankles together at no longer than shoulder width apart helps the fighter better discipline himself not to take a too wider stance. A rule of thumb when it comes to stances in MMA is to use shorter stances for mobility and longer stances for grappling.

We then covered the clinch and took part in a couple of rounds of wrestling. Here I looked at defence from a single leg takedown into a single leg takedown. I noticed that takedown defence was fairly strong, but there is a danger of playing a too negative game. In grappling only competitions you can get penalized. It is not such an issue with MMA except that it can inhibit exploration and retard progress. You sometimes need to take risks and if you become too obsessed with breaking holds you will end up constantly on the back foot.

As we went to the ground game we looked at the top position. We covered eight submission points from transitioning pins. These included arm-bars from scarf-hold and knee-pin, the Americana key lock from side control and kimura key locks from the north-south and reverse scarf-hold positions. Then we put these attack and defence from these positions under pressure. This was done through some progressive resistance. We began drilling the simple motion of putting the holds on and then progressed to defending them at 30%, 50% and then full out specific sparring.

The ground section was concluded with arm-bars and triangle chokes from the closed guard.