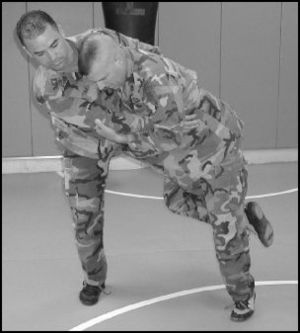 The next grading is set for this Saturday, so I thought it best to handle all relevant training “on the spot”. The whole reason why I kept traditional gradings, which take place outside the usual lesson time, is to test an individual under mental pressure.

So, after a quick warm-up, I selected pairs to demonstrate different aspects of the grading. Fundamentally CCMA is interested in seeing whether an individual has good personal security skills, understands pre-fight, in-fight and post-fight, understands pre-emption and proactive counter-offensive striking tactics, understands how to perform a takedown and understands how to fight from the ground. All of these areas are layered upon from the first grading onwards. Middle grades onwards need to be demonstrating their ability to coach other students. By putting everyone on the spot and demanding constructive critique from all those watching, we provided a good mock-testing environment as well as an opportunity to scrutinize for improvement.

This took up the majority of the class time as we sought to improve everything from making the role-play more realistic to training correct responsive behaviours. We also looked at how pressure was increased depending on the phase of training. This came out in the takedown section. When I first founded CCMA my intention was to guide students rather than instruct them in a specific style. When we cross-train we might learn certain techniques, but when it comes to gradings a student is expected to respond to a situation with the most appropriate technique. Rather than having an examiner ask him to perform a certain technique we want the student to use what the situation dictates. The situation is largely dictated by the relative size and experience of the two students performing the takedown. We are not interested in aesthetic brilliance or so-called “purity” of technique, only efficiency of the individual. We have no listed techniques and students are encouraged to research other systems, and other systems are brought into the classes on a regular basis.