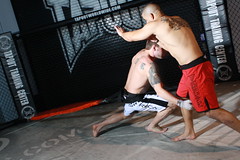 We warmed up using agility drills. The exercises included drop squats, 45 degree step-outs, pogo jumps, zigzagging and sprawl/double-leg takedown entries. We then revised some stand-up on the focus mitts. Pad-work was freestyle in nature and then interspersed with 10 second bouts of rapid straight punches, hooks, uppercuts, round kicks and knees.

We then continued work on the clinch range. Having covered a single takedown for the highline and midline last week, we practiced the single leg takedown for the lowline. This was taught off a jab. The entry for the single leg is too dissimilar to an overhand right, just thrown at a lower level and is the way it was drilled. We then went back over the highline, covering a basic trip takedown. This sends your opponent in the opposite direction to the Thai pulldown takedown from last week. The lesson finished with MMA guard passing and then some static stretching.

After a brief functional fitness warm-up we covered some stand-up on the Thai pads. We revised the basic punch/kick/kick/punch combination and then the jab/double leg takedown combination. This second one progressed to a ground ‘n pound combination – hammer-fist/overhand right/low hook. We then continued on from last week’s takedown defence and went through a brief sprawl series of counter-attacks:

We then moved onto the counter to the sprawl

The session was finished with a High Intensity Interval Training method, the Tabata.

Jamie Clubb is available for private lessons, online coaching, workshops and seminars covering a wide variety of services. Contact him for your bespoke training plan. jamie@clubbchimera.com