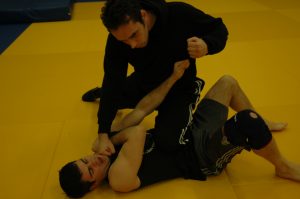 My Kingham Hill Self-Defence class focused on symmetrical ground fighting. We looked at fighting from the back in two different positions and general conditioning for this type of situation.

The class was warmed up with our standard tactical running, covering, switching directions and sprawling. Then we did an additional segment, which also brought in relevant ground movements. This segment included bear crawls – backwards, forwards and sideways – and snaking/shrimping – backwards and forwards.

We then began with fighting from the guard position. This is a likely position for anyone to end up in when a fight goes to the ground. The most obvious scenario in this respect is an attempted rape situation. I first taught controlling the hips and escaping to a standing position. Strikes, eye gouges and head control was included as useful add-ons. Next we looked at simple sweep, learning how to turn a person attacking from within the guard. In the first instance we used combat base to return to standing; in the second instance we used a knee-pin. Next we trained bridging from under a mount-pin. Here everything was directed towards effective leverage, bumping and turning the attacker.

The lesson finished with two 5 minute rounds of specific pressure-testing. Attackers wore head cages and defenders were permitted to strike and eye gouge.