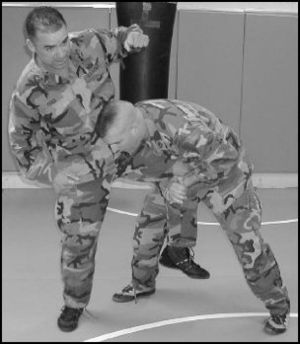 This was the last lesson before our Easter/May bank holiday break. Hopefully if we can get some more classes running on another day the interruption won’t be too severe.

Like many moves, what a student thinks they see with the aforementioned technique and what is actually happening are often two different things. We surface read techniques, seeing their uniqueness and then fail to apply them because we have no clear reference point or a misunderstood reference point. So, the two-on-one wrist grab, as the name implies, just looks like you are pulling on an opponent’s wrist. In fact, what needs to be done to make it an effective move is to move your body in as close as possible, pinning your opponent’s arm to them using your shoulder and head. Technique is a close relation to the traditional two-on-one Greco-Roman wrestling hold, where the objective is to trap the arm and keep on one side of the body. Pressure is exerted down in this version – in jacket-wrestling arts like Brazilian jiu jitsu the sleeve is gripped by both hands – and the opponent often responds by trying to pull away. With the opponent’s attention focused entirely on the upper body, you immediately transfer to the low line and pick up the leg nearest to you.

We then finished the combination with the correct ground position. Depending on how you execute a double leg – and this can be dependent on how your opponent responds – it is easy to get caught in a half guard. I appreciate the half guard position isn’t as troublesome in MMA as it is submission grappling, but it’s still a proactive position. We should aim for side control or the mount position. In this instance we looked at getting the mount position and then going straight into the basic arm-bar we have been covering. This section was finished with some stand-up grappling sparring.

Having covered clinch we went back to the stand-up fighting range and the areas covered last week. We began with the peek-a-boo boxing guard again and taught it alongside slipping and the counter-jab opening move. This rolled into a combination of kicks or punches.

The lesson finished with clinch versus stand-up sparring.

DON’T MISS: Our FREE one hour workshop on 8th May at The Martial Arts Show, NEC.