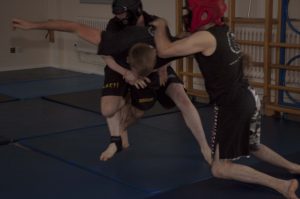 Today’s afternoon lesson was the second in Kingham Hill’s Basic Self-Protection/MMA course. We began with some simple fence targeting and target familiarisation. These exercises are designed to train a robust and legal way to set up a pre-emptive strike. I do this as a touch-contact drill to reinforce the behaviour to hit realistic targets. This is then overlapped with hitting the focus mitts.

We discussed intent and the anaerobic nature of striking for self-defence. This was used to motivate the rate of impact being delivered. When training self-defence skills one has to assume that a predator will have obvious physical advantages, which is why this sniper approach from the Fence is being trained. However, if the strikes being thrown don’t have any impact or aren’t meaningful the narrow window of advantage will be lost and the predator will have an opportunity to return fire.  We also discussed perpetual awareness and I mentioned the “double-tap”. This subject was raised when I added on tactical escapes following striking. It is very important for a person practising in self-protection to train themselves to properly access an exit point or place of safety. My recent podcast is entirely focused on the “double-tap”(linked below).

Next we moved onto incidental combinations – introducing overhand strikes, hammer-fists and straight knee-strikes. This addressed the likely responses to the uninterrupted flow of counter-offensive strikes.

I then introduced everyone to their first pressure-tests. These were relatively light, in order to get everyone used to contact training. Self-defence pressure-tests are asymmetrical by nature, which is discussed in my third podcast (also linked below). This one pitted grappler, where a head-cage, against a striker. We first did it as a predator vs prey exercise (video from a seminar I taught in Denmark linked in below), where grapplers mingled with all the strikers opting when to strike. Then everyone was paired off to make the experience a bit more intense. We followed the rule that the grappler only need to hold on for five seconds. This puts the pressure on the striker to avoid contact and strike as early as possible.

The lesson finished with transitioning through postures to get everyone ready for more restrictive training next lesson.