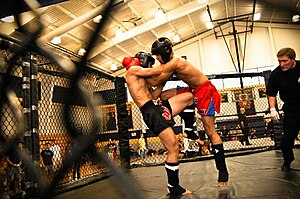 The private student had just come back off a holiday, so it was important to revise previous material. When it comes to teaching self-protection, my concern is to ensure that there is a well-worn path back to the simplest tactics. The overall purpose of basic civilian self-protection is to prevent or neutralize a physical assault. The best way to handle this is escape and the best form of escape is avoidance, which is covered in the personal security aspect of training. However, if avoidance is not accessible then immediate escape, dissuasion, compliance or compromises are all possible options. Failing that you will have to resort to hard skills, covered by the self-defence aspect of training. However, even when you are engaging in a fight your training should be orientated towards escape. Therefore the majority of self-defence exercises need to come back to this point. The objective of the person being attacked is to take charge of the situation so they can facilitate this escape. If they have to engage a person intending to assault them then a pre-emptive strike is the best tactic to take and to continue counter assault, uninterrupted until they can escape. The ideal target is the attacker’s highline and preferably the head. If this cannot be immediately accessed then the defender needs to go for whatever other target present itself with a view to escaping or accessing the highline. If pre-emption is not possible and the defender is still able to act – in other words, he or she is still conscious – then he or she should work as quickly as possible to regain the initiative.

These areas were all reviewed, training the fence, constant force, reactions to targets and the cover. We then moved onto anti-grappling tactics, looking at eye gouges and head-buts. This was followed by primal grappling tactics. Primal grappling is a term I use to describe our natural way of fighting. Certain grappling holds and moves are inherited as a means for fighting for dominance in a tribal setting. I take these holds and refine them using the knowledge we have gained through grappling sports. However, we keep that pathway open as much as possible before we move off onto attribute training. The mantra here is “strike when you can; grapple if you have to”. Grappling is primarily used as a back-up tool to give the defender a better chance to resume or begin striking.

We began off the cover tactic. The student covered and, presuming it was not prudent to overwhelm his attacker with counter-strikes, he goes for a highline grip (comparable the Thai plumb double-hand hold or wrestling necktie single hand hold) and brings in knee strikes. We looked at the head-lock, perhaps one of the most basic primal techniques a human can use. This was then followed with hand strikes. We looked at counters to the head-lock beginning with avoiding the attack as it made initial contact. This was followed with escaping from the hold before it was fully on. Finally we looked at eye gouges, groin attacks and basic leverage to prize a full hold off, returning to highline hand strikes.

Next we revised knife awareness and defence. This was followed with defence against blunt instrument attacks, focusing on counter-attacking an enemy going for a double-handed back swing – common with baseball or cricket bat wielders.

Edged Weapons, the clinch and the grading continues (diary entry)
Single Legs and the 300