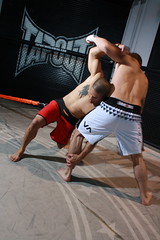 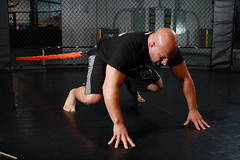 Tonight we focused on syllabus material, ready for the grading to follow. This began with revision on the fence against focus mitts, including multiple attackers. We then went to clinch and performed responsive takedowns. This is an exercise that consists of one student standing in the middle of circle, and responding being clinched by performing an appropriate takedown. Those clinching attacked using 30% resistance. This was followed with asymmetrical ground-fighting – one student stands and the other fights to get back to his feet. The lesson finished with a discussion on the five tenets and how they relate to self-protection.

The grading was mainly for intermediate/senior students with one junior grade. Due to time constraints it will continue next week. Tonight’s material consisted of work from the fence, the cover, takedown defence, stand-up fighting on the focus mitts, takedowns and defence from the ground. Most of the students present took turns in leading these various areas, including a combat specific warm-up with applications.