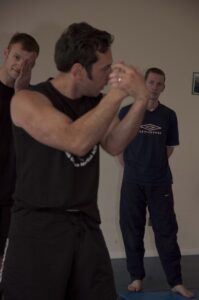 Hour five of my two clients’ Muay Thai clinch course looked at sweeps. I always found sweeps in Muay Thai to be a tricky subject. They have to be subtle as so many aspects are not permitted and it has to be remembered that, despite the fact that clinching is a major part of the modern sport, Muay Thai is mainly about striking. Therefore sweeps and trips have to be very much about using momentum and often in conjunction with strikes. Just looking at the IKF rule-set on sweeps and trips and recalling Tony Myer’s judging course back in 2004 sometimes makes my head spin on this area. In essence, you are not allowed pick up, perform any form of hip throw, use any form of foot sweep or leave your foot out as the opponent goes over.

We covered two sweeps, which are essentially variations on the same technique. The first was a simple trip whereby the fighter breaks an incoming opponent’s posture with an elbow-tie and then send them over their leg. It is important not to use the sole or inside of the foot or the ankle or to leave the leg out as the person falls. We trained this particular version as a counter from an entry into a clinch and also as initiated from a spear knee i.e. the fighter throws a spear knee in the clinch and then sweepas as the opponent throws a knee back. The second sweep worked off the curved knee drill we have been training. Here the opponent is swept as they throw a curved knee in the clinch. We then moved onto the belly pad for 2 x 3 minute rounds and had 1 x 3 minute round of clinch-only sparring.