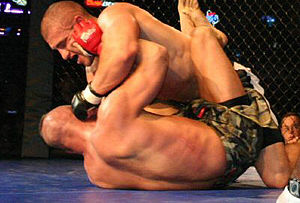 08.08.11: A central focus of a lot of CCMA’s approach is the overlap between self-defence education and attribute training. Often what constitute as attribute training are the full-contact combat sports. Although much of the dynamic is different, there is a rich area for crossover. Today we began with self-defence tactics and evolved into MMA tactics via the cover.

After a specific warm-up, training all ranges, we began with the fence. This was done with a target familiarization exercise. This is a role-play method whereby one student puts up a natural barrier with his hands in order to control distance from a would-be attacker. Once the barrier is breached – the negotiating hand touched – the person using the fence responds with a controlled pre-emptive strike to the appropriate target. This is then overlapped onto the focus mitts at full power. More advanced students carry this on using other instinctive techniques as the targets change i.e if it drops low they respond with a knee strike.

We then moved onto a standard recovery tactic, the cover. Here students are physically prompted in a code white situation (they have their eyes closed) and are taught to cover from a barrage of strikes whilst moving in and counter-attacking. After drilling this with a single coach, each student faced four coaches from all ranges for undetermined lengths of time.

By using the cover we then worked entries into four types of takedown – cross-buttocks/headlock takedown, hip throw, high single leg and low single takedown. This was drilled with one student striking and the grappler moving onto each line of attack. Moving to the ground position, one student sat in the guard with his boxing gloves and striking whilst the other tries to submit or sweep him. This trained the cover from the guard and followed a similar principle as the stand-up grappling attacks. However, this was trained at full resistance. I was happy to see a lot of the work covered in the previous month came out in these bouts. Hook-guard sweeps, oma plata sweeps and submissions, as well as armbars were attempted and achieved under full sparring conditions.

The lesson finished with a discussion on fear and the many different ways it affects us. We talked about it on a physiological level and then the different times we have to face it.