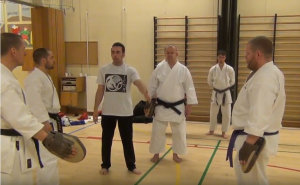 Wednesday afternoon saw the completion of this term’s course in Self-Defence for Kingham Hill School. I put it the assembled class what would like to go through and we also had a fair amount of discussion time on self-protection in general. Topics included going in depth into using the fence – setting boundaries, training an automatic pre-emptive strike, mentally turning off the inner-nice guy, putting the metaphorical breaks on during a counter-assault and the effects of stress upon vision.

The lesson began with various evasive running exercises and changing directions. This was followed with the fence drills, where we worked on keeping the boundary lines natural and understanding when to put them up. We followed on from this part with work on improving straight rear hand strikes. We then added on the incidental combinations.

The lesson finished with a series of peripheral vision tests. This is a simple drill taught to me by Alan Cain. It involves a minute of one person striking a pair of focus mitts on the spot at speed and with power. Obviously the level of speed and power will level off in accommodate the prolonged period of time – such strikes are best administered in short bursts rather than as sustained period of steady state cardio. One person stands either side of the striker, where they can raise their hand just level with the extent of their peripheral vision. They will raise their hands at random intervals for no more than two seconds throughout the one minute exercise. Two other people stand behind the person holding the focus mitts opposite the two peripheral people to count how many times the striker misses those raising their hands. The exercise raises the stress levels and depletes various resources, creating several changes in the body. One of these changes is the narrowing of vision. This test is a great way of raising awareness of this narrowing of the vision.