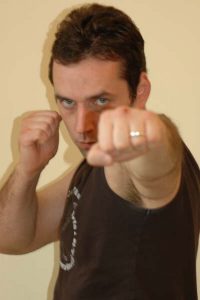 The first lesson of the morning began my long-time client on his course of Combat Conditioning. We worked on improving speed and power as well as the underlying fitness needed to execute jabs, lead leg teeps and double-leg takedowns – all lead side techniques.

The lesson began with a series of callisthenic/mobility exercises focusing on combative movement. We then looked at the jab from both stances. In order get maximum movement, flexibility and to keep the lead arm relaxed, we worked everything off the low-guard and the Philly Shell. We incorporated this into footwork (particularly the L-Step), worked the shoulder roll defence and I examined any flaws in the defence when combinations were added onto the jabbing.  I introduced some simple speed development exercises, which he did 3 x 20 reps off each side. Then we moved onto the power jab, making use of the pendulum foot movement and engaging the lead oblique muscles.

The teep (front kick) was taken through a similar procedure. Only the technical side we trained a jab in combination with the lead leg kick. Here we worked on strengthening the link between these two techniques, keeping a strong posture throughout the execution of the technique and maximising the seesaw effect. Speed conditioning was done in the same manner and so was power development (using the pendulum footwork).

The double leg takedown was examined and the shifting part of the technique was given more examination than normal. This shift is important in order to effectively penetrate the opponent’s space. We combined the technique with the lead jab and then worked on maximising speed and power as with the previous techniques.