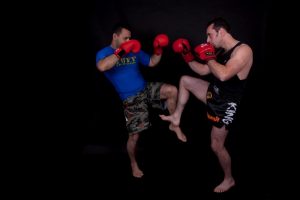 We went through last week’s triple combination flow drill and then we looked at using the shin-check to launch a counter.

The first two combinations were counters to a low round kick. The check is a technique that should be used as a direct interception to an incoming kick rather than just as a block. The shin is driven directly into the incoming kick. This action should be coupled with another strike to take immediate advantage of any balance compromises or openings made by the person kicking. The first two combinations took this into mind:

The last combination put the check in mid-way. Having promoted the punching and kicking set-ups as well as using a shin-check properly it was now a case of being able to throw a second combination in smooth transition after an attempted counter off the first one.