General Lesson   The lesson focused on attack and defence from the mounted position. We looked at the cover, the bridge and the snake for the defence. This moved into half-guard and taking the back. From the attacking top position we set up for arm-bars with strikes. Sparring was mount position specific. We then warmed down with some shadow boxing and stretching.   Private Lesson 1   We continued with our technical theme and I ran through the angling/targeting/timing exercises […] 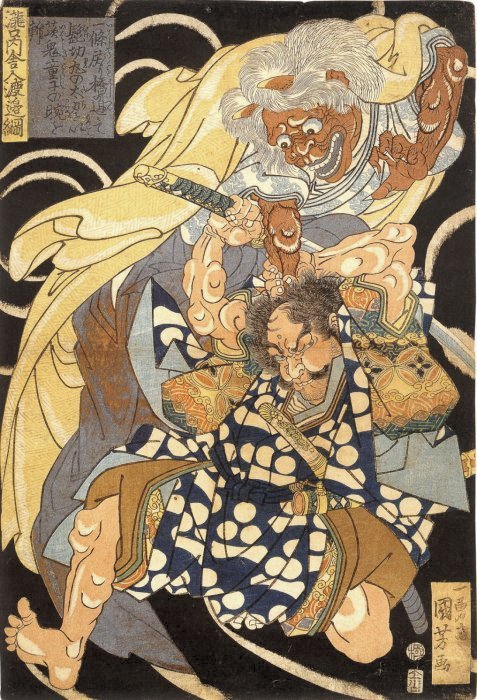 Illustration of Japanese Imperial bodyguard Watanabe no Tsuna fighting a demon (Photo credit: Wikipedia) 16.06.13   Apparently the best antonym for “self” is “other”, which would mean that one half of today’s lesson could be described as other-defence. It doesn’t have the same ring to it, but I am loathed to call it civilian bodyguarding, as that doesn’t seem entirely accurate. Nevertheless my friend and close-protection instructor, Al Cain once told me “You are your own bodyguard”. I believe that […]

15.06.13   My mandate for today’s private lesson was to teach edged weapon defence leading in Clubb Chimera Martial Arts training methods. The lesson covered a line of increased risk situations, from evasion to an unarmed close-quarter counter-assault. No specific scenarios were mentioned, as it is impossible to train for every exact hypothetical situation and far more productive to teach a generic set of tactics.   It is important to note that due to time restrictions and specific requests from […] 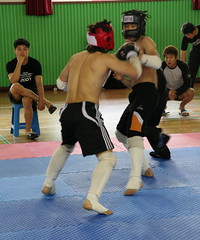 Striking (Photo credit: parhessiastes) General Lesson   Today I allowed my junior brown sash to take the class under my supervision. Here I was able to take a supporting role and help guide him, and pay more attention to individuals. I was able to check on finer details. My appointed coach decided to allow for a democratic decision on tonight’s area of study. Takedowns were singled out.   He began by using the 20% resistance improvised throw exercise. This is […]

07.06.13 Today’s session was primarily a strength conditioning class. We focused on an upper body routine for developing a stronger base and used striking as area of specific training. I have to say that I find it difficult these days not to incorporate some martial arts technical work into my training, even if I have written an entire session as attribute conditioning. UFC champion Sean Sherk says that he puts his technical work at the beginning of a session and […]

03.06.13 General Lesson – Mixed Martial Arts (Stand-up and Ground) Today’s training consisted of going through the four basic kickboxing combinations called in random order. It is a good concentration exercise and once everyone was comfortable with the sequences I made sure the pad holders kept things moving. We then did a couple of ground fighting games – Crazy Baby and Touch the Head. The first works the butterfly guard and promote good movement for the top and bottom game. […]

02.06.13 We began with a look at weapons and the whole issue of base principles. My ideal is to have as few principles as possible so that a student can easily utilize them in any situation. Unfortunately it isn’t always possible. Humans evolved to use external weapons. Once armed and with intent most humans become considerably more dangerous than when they had nothing in their very well adapted hands. Southeast Asian martial arts often begin with weapons and then complete […]

01.06.2013   I was given the mandate to teach a two hour western boxing private lesson yesterday. I am not a western boxing coach. I have trained under a fair number of excellent senior boxing coaches and I consider it to be a superb base combative art for anyone who is interested in improving their striking. Therefore, I used the lesson to offer my CCMA perspective through the restriction of this combat sport. Over the past few weeks my general […]

30.05.13   General Lesson   After a student-led warm-up, we continued with our series of combination training exercises. This time we looked at the boxing-led series, covering four combinations. These are a series of progressive boxng combinations that add on a kick at the end. Once learnt they are then called out in random order. The purpose of doing this is to promote a better retention of memory under combative conditions. Areas of concern included holding targets correctly and keeping […]

The regular heel hook twists the ankle medially. The opponent's leg is entangled to prevent him from escaping the hold. (Photo credit: Wikipedia) General Lesson   The problem with focus mitts is that you can all-too-easily get carried away with them. There are many ways to approach target training and I feel they are an essential part of developing strikes. However, they can have some counter-productive side effects. This is why working directly with another fighter is very important. Therefore, […]

13.05.13   General Lesson   The warm-up consisted of drilling repetitions of striking/grappling combinations up and down the hall. These included transitioning from hand strikes to lowline takedowns to entries into throws.   Next we revised two of the recent pad drills we have covered to help build better attributes for stand-up fighting. We went over the asymmetrical combination, using a choice of the right cross or the right round kick for the power technique. Then we revised the lead […]

12.05.13 This client was keen to return his training back to basics after our last session’s complete detour into cross-training. The above diagram demonstrates my approach to learning cross-training attributes to improve self-defence. Despite a long lay-off between sessions and even longer one between self-defence specific training the student confirmed that the low maintenance nature of the techniques taught. After a short warm-up we went straight onto the focus mitts for some fence revision. Transitioning from postures for […]

09.05.13   General Lesson – Mixed Martial Arts/Self-Defence – Asymmetrical Combinations & Tactile Awareness   Today’s general lesson was inspired by two great martial arts teachers and friends of mine, Ron Goin and Iain Abernethy. After a brief session of solo movement drills for stand-up fighting, we went straight onto the focus mitts. Taking my lead from a discussion I had with Ron Goin, I looked at exploring asymmetrical combination work. I use combinations or any set patterns merely to […]

29.04.13 General Lesson – Junior Mixed Martial Arts – Patterns of Movement After performing a series of warm-up exercises that covered all three ranges of combat, we began on the focus mitts. Today, we looked at timing and patterns of movement. We began with a very basic boxing three-punch combination and then put in an evasion; in this instance it was a roll (bob ‘n weave). At length you can add on more techniques and bring in the evasions at […]

22.04.13   Private Lesson – Self-Protection – Soft Skills/Pre-emption/Recovery   We began with a discussion on practical awareness. This is not as easy a topic as many self-protection instructors would lead you to believe. Different people have different levels of awareness and, going by their own experiences, judge situations in different ways. For example, my two clients who booked me for this series of lessons are aware that they lack a degree of confidence. The last thing they need to […]

22.04.13 Private Lesson – Mixed Martial Arts – Stand-up/Clinch   My client is almost fully recovered from his calf and knee injuries. We could do more stand-up work and I brought back some kicking. However, we also continued and confirmed some of the speed training we focused on last week.We began with responsive flash-pad drill. Here the focus mitts are raised for very short periods of time, with the fighter often missing them. It is obviously important for the fighter […]