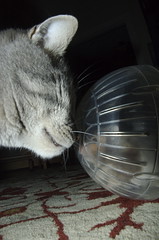 I received the usual enthusiastic and keen response I have come to expect from the young students of Telford Kyushinkai Martial Arts Centre’s black belt club. After a student led warm-up, I began with some escape-based exercises. This began with much larger students being paired with smaller ones. Such exercises throw into question normally robust principle of striking the highline of one’s adversary. The highline target is never the head in such situations and other targets on the body that would seem to be worthy substitutes – the solar plexus or groin – are often out of range. Consideiring how easy it is for a young child to be simply picked up by a far larger adversary it is not advisable to tell them to close down the distance. So, we look towards case studies and tactical common sense for preferable answers. The children were taught to bite the hands of those who gripped them and stamp at feet. If the groin became available, obviously that was struck too. Comparisons can be found in the non-human animal world with chimpanzees and similarly sized primates that inflict the most damage to the hands of humans they attack. Likewise, Southeast Asian martial arts, which often have their basis in the use of sticks and knives, understandably also seek the limps as primary targets.

We then moved into multiple attacker situations with a series of exercises promoted good use of evasive tactics to appreciating tunnel vision when under stress to simply fighting several people at once. The physical session was finished a scramble ordeal to test will and mental fortitude. We then discussed states of awareness.

Yet again, I thoroughly enjoyed teaching at the academy. Sam Stewart has done a fine job in continuing to improve his flourishing academy. There is a wide range of disciplines on offer and some great instructors. As always, I thoroughly enjoyed my time chatting with with all those present and I look forward to returning.