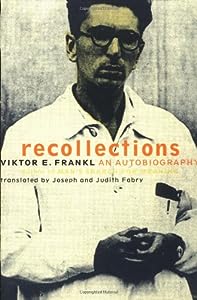 Cover of Recollections: An Autobiography

"Recollections" is Viktor Frankl's little known autobiography. Frankl rose to academic acclaim in the world of psychiatry through his background in psychiatry and neurology forming the "third Viennese school of psychotherapy" and developing his own form of psychoanalysis known as logotherapy. Frankl rose to mainstream success with the publication of his book Man's Search for Meaning, which details his three years spent in four Nazi concentration camps. Recollections details Frankl's early life growing up in Austria, a brief account of his parents, his first wife, his experiences with Sigmund Freud and Alfred Adler, the development of his own programme, his time spent in concentration camps and his rise to success afterwards. The book is illustrated with black and white photographs, and some of Frankl's original cartoons. Counselling methods include paradoxical intention, common denominator technique and fate analysis

Like his most famous book, "Man's Search for Meaning", "Recollections" is a slim volume and a reasonably light read. This is quite surprising given Frankl's extraordinary life and complex interests. As one would expect, the book is a much more personal account than "Man's Search for Meaning", where Frankl purposefully tried to remain objective. In fact, the appeal of "Man's Search for Meaning" was that – unlike many other tragic recollections – it was clearly not written to illicit sympathy, but to convey how purpose and strength could be found in even the darkest of places. "Recollections" reveals much of Frankl's humour and a lot of his mischief. Being a person fascinated with the study of the mind and human behaviour he admits to being manipulative and times, and even gives an interesting tip on how to get out of a ticket derived from his "paradoxical intention" technique!

Frankl's experiences with both the Freud and Adler schools are interesting insights given that he was a contemporary of both founders. He broke away from both schools to found logotherapy, which he self-depreciatingly dubbed the "third Viennese school of psychotherapy". Yet Frankl did far more than just write a best-selling book that reinforced the psychiatric methods he had been employing. Long before Frankl and his family were taken to the concentration camps he had a very impressive success rate for preventing suicides. This had already gained him a considerable reputation. Despite being a Jew his opinions were still held in enough esteem by the medical profession that he actually saved patients from the Nazi euthanasia programme.

The book also reveals much of Frankl's other passions outside of psychotherapy. He was a keen mountaineer and also a cartoonist. On the latter subject I find that I come to the weak point of "Recollections". Frankl often talks about how he has used humour in his therapeutic sessions and sees its obvious psychological benefits. Unfortunately this does not come out in his writing. Frankl, I am sure could have achieved many things if he put his considerable intellect and lust for life into it, but I am not convinced he would have had them rolling the aisles as a stand-up comedian!

"Recollections" is a modest, succinct and interesting personal reflection on an extraordinary life and the development of an inspirational philosophy. It is in this book that Frankl draws the connection between psychoanalysis and philosophy, and I am glad he did. Despite the credible attention to studies psychology that Freud and Adler drew the medical world towards, psychoanalysis is the fertile ground where a lot of pseudoscientific psycho-babble has been grown. However, as a philosophy Frankl provides a fascinatingly positive and focused way of looking at life. This book is often dwarfed by "Man's Search for Meaning", but I recommend it for anyone who really wants to find out more about the man behind the ideas.

If you enjoyed this review please support this site by purchasing directly through this page and clicking the icon below. It won't cost you a penny more than it would do on a normal Amazon purchase: